The Distance From Here // A photo essay by Belqis YOUSSOFZAY.

Australia’s recent history as a country is partly founded on the notion of nothing-ness, a Terra Nullius free to be claimed and settled, but of course, had the English paid attention or more accurately, chose not to turn a blind eye, they would have found that this apparent surface of emptiness was in fact scored with the brushes, sweeps, tracks and traces of many things: people, animals, people carrying animals, animals carrying people…

The Australian outback still maintains this dichotomy: a big empty-ness seemingly traversed by wind and light alone but through her careful photography, Belqis Youssofzay uncovers and brings to light the traces in a landscape that is and has been quietly inhabited since the beginning of time.

This essay gives a subtle and delicate scale and texture to a landscape that is more often represented as boundless and flat. In this essay, the impossibly vast Australian landscape – the dry salt, the scruby bush, the specks of light, the warm earth – could almost fit into one’s hand.

In the artist’s own words:

“As a creative person I have always held an almost anthropological fascination with storytelling, landscape and workings of cultures. The opportunities to investigate these interests and curiosities in the practice of architecture, the profession in which I trained, have been limited to some extent.

That is how my art/writing practice emerged. I use a range of mediums, predominantly film, photography and prose to investigate and tell stories about people, cultures and landscapes.”

“The Distance from Here emerged from two key ideas that I wanted to investigate. One was the exploration of the vast terrain of the Australian outback, a place that has had an immense impact on how I see and engage with the landscape. And parallel to that I wanted to engage with the more specific histories of people that have occupied the landscape.

A couple of years ago I travelled to Lake Mungo for a job and was deeply moved by the histories that the seemingly banal landscape contained. Woven through the extinct lake landscape were relics of thousands of years of human occupation and stories. I started seeing the landscape as a receptacle for history.

Recently I returned to that landscape. I traveled a long loop from Sydney to Mildura, Lake Mungo, Menindee Lakes, Broken Hill, Bourke and then back to Sydney. Along the way, I took hundreds of photographs, in particular focusing on places that had stories or histories related to them.

The photographs in The Distance from Here have tried to capture an experience of traveling through this vast terrain where nothing happens for miles, but when you stop and study, rich histories emerge where cultures and stories have persisted and perished.”

“Hundreds of shots were taken but only a handful were taken through a digital post-production process. Ultimately only carefully selected images appeared in the exhibition.  Each image hides subtle clues to representations of past human histories in this landscape

For example the photograph titled The Prayer Room shows a derelict tin shed. The shed was once used as a site of prayer for Afghan Cameleers that had lived in Bourke. The little building is quite modest and small, it has two windows and a small doorway. Nothing from the inside or outside signifies its purpose. The only feature that hints at its use is a band of floral motif that runs through the middle of the space. This shed once stood in the township but has now been moved to Bourke Cemetery and closed for public to enter.

I didn’t set out searching for this ruin but ‘found’ it accidentally. It deeply moved me to think that this little building in a distant place like Bourke contained the unique history of the Afghan cameleers and their intimate rituals of faith. The shed and the greater landscape surrounding it was suddenly imbued with a stronger sense of history and presence. I chose to exhibit this image next to a close up shot of scrub titled Terra Nullius, shot not far from where the little mosque has been relocated. The scrub is no longer an empty space but an important site where so many histories have traversed.” 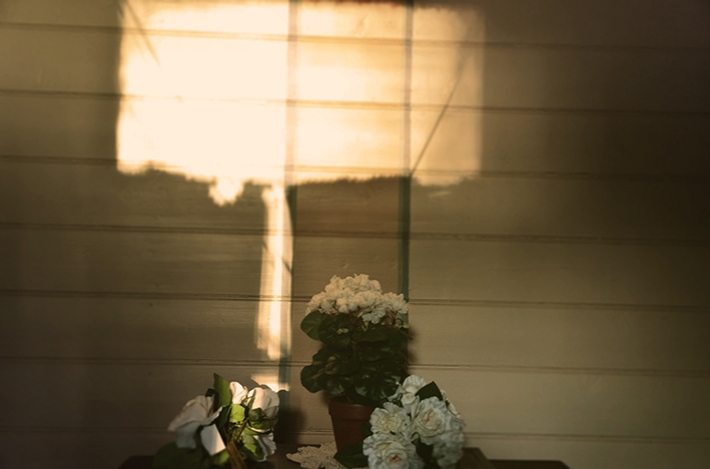 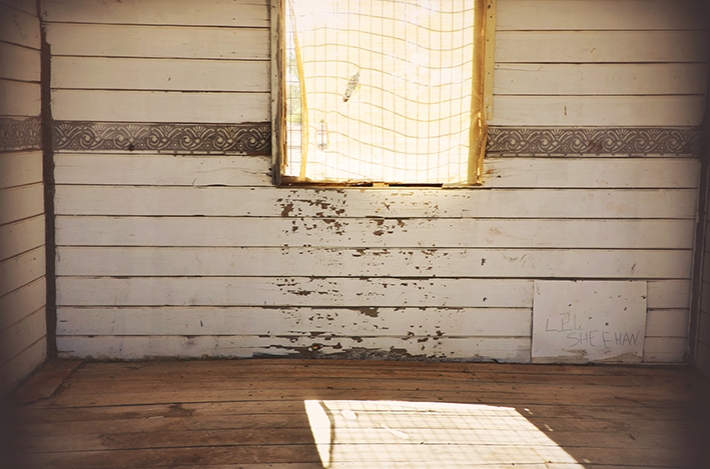 “I am developing a series of large format film based works. Currently, it is still in research and development phase. At its core, it will expand on the ideas investigated in The Distance from Here through the medium of film.

Other than that I am working on a body of written work, short pieces of fiction concerned with notions of exile and memory. Ideally I would like to see some of these stories illustrated. I have been publishing little snippets of these stories and look forward to publishing more next year.”

Belqis Youssofzay is a Sydney based visual artist and writer. She graduated with a Bachelor of Architecture from the University of NSW. Belqis utilises a wide range mediums in her art practice including film, photography and prose. Her art examines the role of landscape and architecture as receptacles for human history and occupation, her writing concerns itself with notions of exile and otherness.

Belqis has been exhibited numerous times, most notably for Art & About (2011) and Sydney Design (2011). In 2013 she collaborated with Professor Michael Tawa on a film installation titled Interstice at the Tin Sheds Gallery and held a solo exhibition of documentary photography titled The Distance from Here at the Corner Gallery.