The following images contain a little bit of nudity…

Girls! Girls! Girls! is Bonnie-Grace Dwyer’s very first solo exhibition, on show for the rest of this month on the walls of the Funky Novocastrian shop Before It Began which she is also a co-owner of (more on that coming up soon).

Darby st. in Newcastle is like a village within a city, so it is not surprising that seemingly every hipster in town was there to lend their support to one of their own on what was both the opening of Girls! Girls! Girls! and the official launch of Before it Began. It was hot, crowded and noisy with music blaring and bottles in paper bags. A good night all around.

Without as much as a foot in the in-crowd, I came for the photos and was happily surprised by what I saw. There on the walls was the clear manifestation of someone whose passion is genuine and whose dedication to her craft is evolving and growing. Bonnie isn’t hiding behind her subject’s nudity or resorting to distracting gimmicks. Herself, her work and her subjects might be young but the intentions are focused and clear.

As the title suggests, Girls! Girls! Girls! there were indeed and a boy too, his delicate features basked in light and framed by folds of lace looking like a fallen madonna (not the singer). As for the girls, they offered an interesting contrast to our dark loud party. Almost removed from our worldly necessities, each of the series evokes an imaginary land, where mermaids have been washed ashore, angels have fallen from the skies and where a girl (or is it a witch?) lives in the deepest corners of the woods with light, quiet and a few skulls as her only companions. 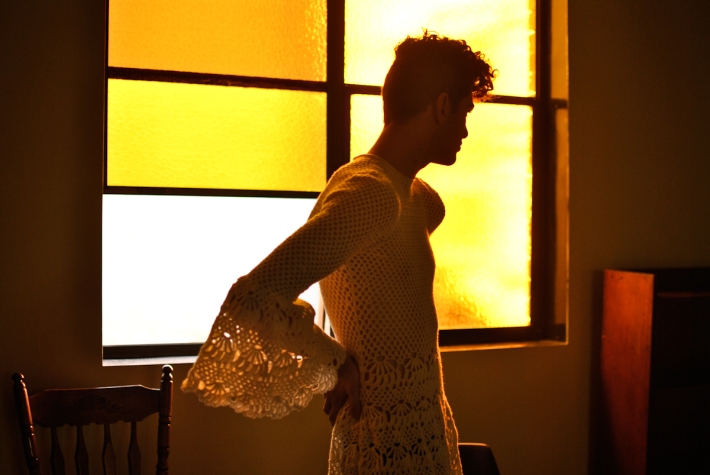 © All photos taken by Bonnie-Grace Dwyer

To see more of Bonnie’s work, visit her blog here and don’t forget to check in to read an upcoming full length interview with Bonnie and Jzhonnie, the girls bringing Before it Began to Newcastle.

Become a fan of the Aloud. Facebook page to see more links to previous profiles and additional links to websites, films, Art and more. You can also subscribe to this blog and receive regular updates directly to your email.